The Path to Economic Recovery Is Clear: Put Texans First and Protect the Services People Need to Thrive

The Texas Legislature has some tough choices to make in the 2021 session. One obvious choice is to use the Economic Stabilization Fund (Rainy Day Fund, or ESF) to avoid cuts to public schools, health care, and higher education. The impact of the pandemic has been devastating — even more so to Texans of color. It’s time to put Texans on the path to recovery. When it comes to the health and education of millions of Texans, the Legislature should not put lives and learning at risk when better alternatives exist.

In July 2020, the comptroller projected a General Revenue shortfall of $4.6 billion, or 4% of legislatively authorized spending for 2020-2021. This came after state sales and other tax collections plummeted in the wake of the recession caused by the COVID-19 pandemic and low oil prices. Online sales and federal aid are helping, and the Texas economy may rebound sooner than originally expected. But this won’t happen quickly enough to eliminate a 2021 shortfall and support 2022-2023 needs. It’s not clear if Congress will pass another relief package for state and local governments before the end of the year, but federal leaders could decide to extend unemployment benefits or other aid to people that could support economic growth and provide relief to the most economically vulnerable.

Even before the comptroller had released his grim update on state revenue, in May 2020 the Governor, Lt. Governor and House Speaker directed state agencies and universities to identify 5% cuts in 2020-2021 general spending. Fortunately, most education and health care services were exempt from the directive, but the proposed reductions still totaled $1 billion in General Revenue, including over 4,000 state jobs eliminated. No official confirmation has been made as to which of those cuts were in fact implemented and became part of the new, reduced “baseline budget” for the 2022-2023 cycle.

One thing that we can tell from the interim cuts, though, is that top state officials agree on the importance of preserving state support for public schools, community colleges and teaching hospitals, health care, public safety, child protection, and other key services during COVID-19. Those services will be just as important, even after the virus is contained, to help create a broader economic recovery that more quickly reaches every Texan. Luckily, state lawmakers have several alternatives to cuts as they bring the 2021 budget back into balance and tackle the job of writing the 2022-2023 budget.

Every Texan proposes the following path forward for next session to address the revenue shortage caused by the COVID-19 pandemic and subsequent recession.

Texas should not cut its way out of a revenue shortfall — the 2011 session’s massive budget cuts made it clear that this results in significant harms to students and to the health of Texans, especially Latinx and Black communities across the state.  There are smart, reasonable, and efficient policy choices to address the shortages, but the smart choices will take the political courage to put people first and not scapegoat students or the health of Texans surviving a worldwide pandemic. We encourage all Texans to make their priorities known to their elected officials. If education or health care services are cut while billions remain unspent in the ESF, it will be a choice of the leadership and policy makers of the Texas Legislature, not an inevitable outcome of the COVID-19 pandemic.

One concern some state officials have raised about using the ESF is the impact on Texas highway funding due to relatively new “minimum balance” requirements. A minimum balance requirement did not exist for the first quarter-century of the ESF’s existence. But when the Texas Constitution was amended in 2014 to divert half of surplus oil and natural gas severance taxes to the Highway Fund — revenue that would otherwise have gone to the Economic Stabilization Fund — a minimum balance was established in state law.

What This Means Now

If the balance of the ESF drops below $7.5 billion before the end of fiscal 2021, $620 million will not transfer to the Highway Fund in the fall of 2021.  However, at least $13 billion a year in other federal and state revenue — such as three-fourths of gasoline taxes, and $2.5 billion in state sales taxes — will still be available to pay for highway maintenance and construction. 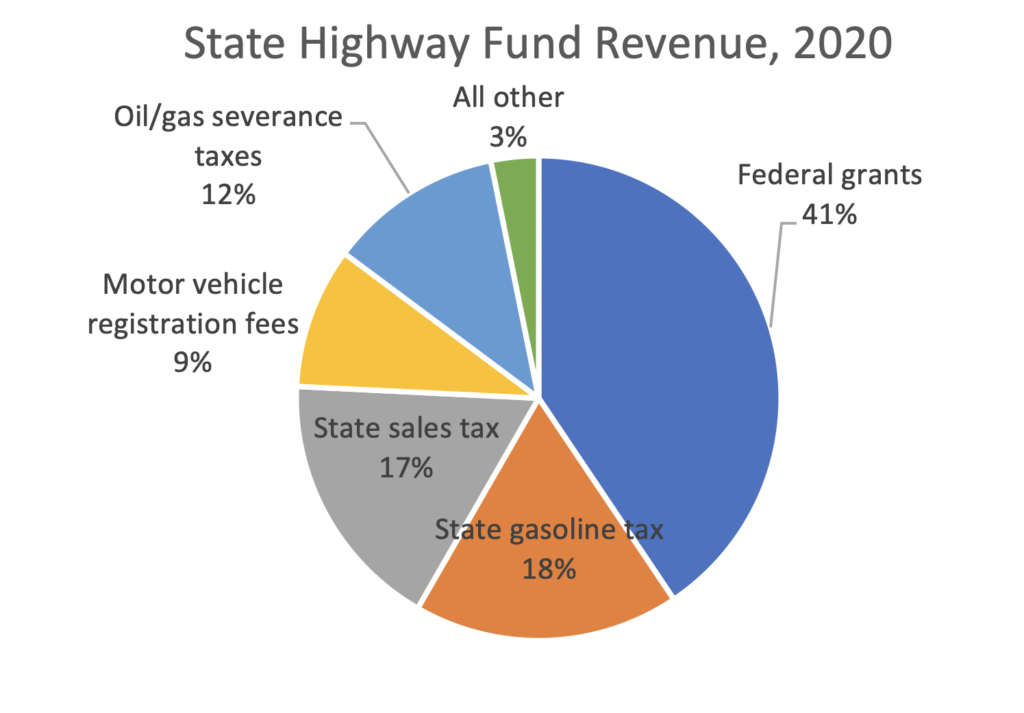 The $7.5 billion minimum was chosen in 2018 by a House-Senate select committee, according to state law at that time. For 2022-2023, new legislation (2019’s Senate Bill 69) eliminated the select committee and any flexibility it allowed. Barring any further action by the 2021 legislature, the balance for the next budget cycle is set by law at 7 percent of General-Revenue-related spending. This inflexible formula could end up requiring a minimum balance of almost $9 billion, unless state lawmakers choose to change the balance requirement again, or eliminate it entirely.

Every Texan understands that a state as large and rapidly growing as Texas requires efficient transportation systems as well as high-quality schools and health care. Highways will continue to receive billions from the gas tax (which, as mentioned earlier, hasn’t changed since 1991), federal grants, tolls, fines, penalties, and some general and motor vehicle sales taxes. Furthermore, the reduced traffic during the pandemic has resulted in lower costs for highway construction projects, which could help offset any temporary fund reductions.  More importantly, when it comes to the priorities for equitable recovery from a pandemic and global recession, state highway projects need to come after lifesaving and health priorities and the needs of school children. Falling behind  in education may affect a student’s livelihood and family for generations. A loss of life is irreplaceable. If they are unwilling to change the minimum balance requirements for the Economic Stabilization Fund, Texas leaders should put people first.

PrevTexas Must Improve Medicaid Renewal to Protect Care for Children and New Mothers
A Legislative Session Unlike Any Other: Our Top 5 Legislative PrioritiesNext