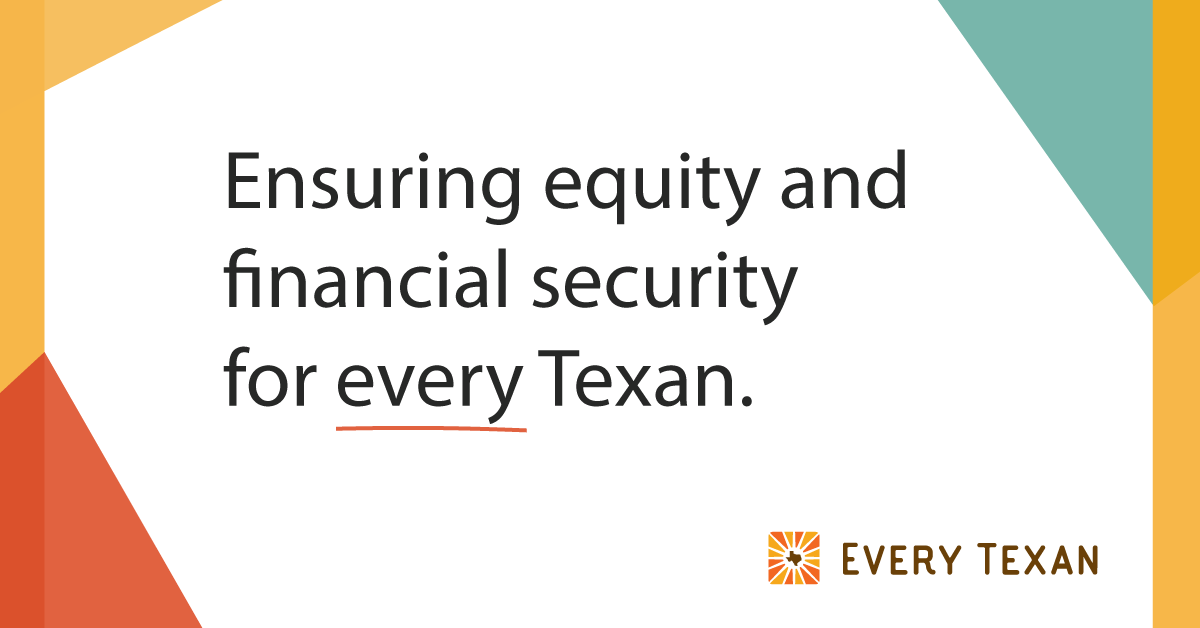 Looking for analysis of the new health insurance numbers released this week? Check out our blog here!

Although median income and poverty rates improved for Texas and the nation as a whole in 2019, according to American Community Survey data released by the U.S. Census Bureau this week, the data does not capture the hardships of 2020’s pandemic and economic recession.

COVID-19 has resulted in increased rates of unemployment, food insecurity, and housing insecurity for all Texans, with a disparate impact on Texans of color.  Millions of Texans report not having enough to eat, being unable to pay rent or mortgages, and filing for unemployment insurance, per data from the Household Pulse Survey conducted by the U.S. Census Bureau since March.  Food and housing hardships have hit Black and Latinx communities the hardest, especially since Black and Latinx people disproportionately work in industries facing job loss due to historical and current labor market discrimination. The impact of COVID-19 has highlighted embedded inequities in our system that make it difficult for all Texans to insulate themselves against shock equally. (See Texas Health Institute’s recent report for more context. )

Now more than ever is the time for the state to invest in, rather than cut, anti-poverty programs serving children and families. At the federal level, Congress must pass a robust relief package. As many as 12 to 16 million people avoided poverty thanks to the CARES Act, according to estimates from the Center on Budget and Policy Priorities, revealing how essential these investments are at the present moment. It is critical that any federal or state relief includes immigrants unjustly excluded from prior relief. (Read our policy roadmap for an equitable Texas, and stay tuned for more recommendations.)

Although much has changed since the 2019 American Community Survey (ACS) data was collected, it still serves as a useful marker for where Texans stood before the pandemic.  ACS estimates are released annually and allow us to track how Texans fare in areas like income, poverty, education, and healthcare. The many types of data the U.S. Census Bureau collects are an invaluable source for helping us measure progress toward achieving a Texas where everyone is healthy, well-educated, and financially secure. (Did you know only a couple weeks remain to fill out the 2020 Census? Learn more here!)

Here are some of the highlights from the 2019 data:

The median household income in Texas in 2019 rose to $64,034, meaning that half of Texas households had income above this amount, and half had income below it. Factoring in inflation, median incomes significantly increased from 2018 ($61,355). However, not all Texans benefited equally from increases in income, as Texans of color were more likely to be low-income due to systemic racism resulting in unequal access to employment, housing, and educational opportunities.

The wage gap persisted for women among full time, year-round Texas workers, with the median male worker taking home over $10,300 more than the median female worker.  That gap was even larger for households of color. White households had a median income of $78,905, as compared to only $47,428 for Black and $52,010 for Latinx households, with Asian households leading at $91,706 – showing that not all Texans are sharing equally in our state’s economic opportunities due to the inequitable impact of workforce policies.

Although the poverty rate improved overall, Black, American Indian, and Latinx Texans were still significantly more likely to experience poverty than white and Asian Texans. Our poverty rate remained higher than the national rate, with 3.9 million Texans living below the official poverty threshold for 2019 ($25,926 for a family of four).

In 2019, almost one in five Texas children regardless of racial identity experienced poverty — 18.9% or almost 1.4 million kids — and children of color were disproportionately more likely to experience poverty. Poverty rates for families in 2019 show that Latinx or Black children are three times more likely to live in families experiencing poverty in Texas than white or Asian children. Children growing up in poverty are more likely to face challenges like housing and food insecurity, which can affect their ability to learn in school. As the 2020 Household Pulse Survey data shows, the proportion of children experiencing hardship has only gotten worse.

Many Texas cities saw similar trends. For example, San Antonio saw its lowest poverty rate in recent history for 2019, but the gains are likely to be wiped away by the effects of the pandemic without proactive and equitable policy response.

Every Texan’s Research and Data Intern Tara Blagg contributed to this report. For more information or to schedule an interview with one of our experts, please contact Communications Director Oliver Bernstein at bernstein@everytexan.org.