In an effort to support policy responses to pandemic-related social and economic hardship, the U.S. Census Bureau is conducting a weekly survey to measure the impacts of COVID on American households. Preliminary results from ongoing data collection have revealed wide-spread losses in Texas, with the state’s most vulnerable populations — including households with children, non-college degree holders, and communities of color — disproportionately impacted. 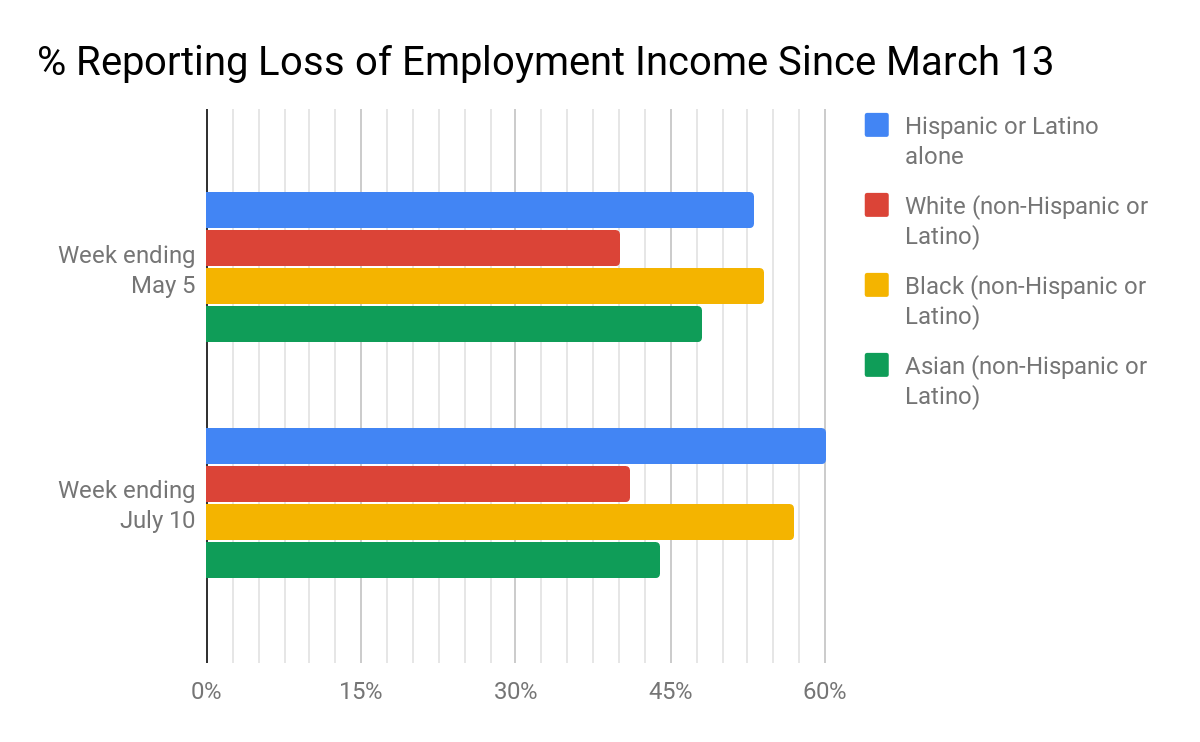 While many lost income, a large proportion of Texans lost employment altogether. At the time of the first week of the survey, 8.7 million Texans were not working. Only eight weeks later, this number grew to 10.1 million. While the greatest percentage of these respondents were retirees (27%), other reasons cited for not working were being laid off due to the pandemic (11%), caring for children not in school or daycare (7%), reduction in business due to the pandemic (including furlough) (11%), and concerns about getting or spreading the coronavirus (11%). Of all respondents who reported not working, nearly all — 83% — did not receive paid leave during their time away from work. Eight in 10 of those who did not receive paid leave were non-college degree holders. Researchers have found that access to paid sick days increases the likelihood that an employee will stay home from work when they are sick, which helps limit the spread of illness in the workplace to coworkers and customers.

While these statistics and disparities are expected to continue to mount throughout the course of the pandemic, Every Texan recommends equitable public policy responses that can curtail their growth. The Texas Workforce Commission should work to reduce time to process unemployment and underemployment claims and expand eligibility. State lawmakers should urge policies that increase the amount of and accessibility to SNAP and EBT benefits to address food insecurity. To limit further loss of health insurance and employment income, the Texas Attorney General should withdraw lawsuits against the Affordable Care Act and against Austin and San Antonio local paid sick leave ordinances. Additionally, Medicaid and CHIP enrollment processes should be streamlined and made more accessible. Texas’ moratorium on evictions should be reinstated to avoid a wave of homelessness in cities such as Houston, which is now the largest city in the country where evictions can resume. In enacting policies such as these, the worst of the pandemic’s economic impact may not be yet to come for Texas’ most vulnerable populations.

A previous version of this blog stated that over an eight-week period, the number of Texans not working increased to 10.7 million, when the correct number is 10.1 million. The statistic has now been corrected.