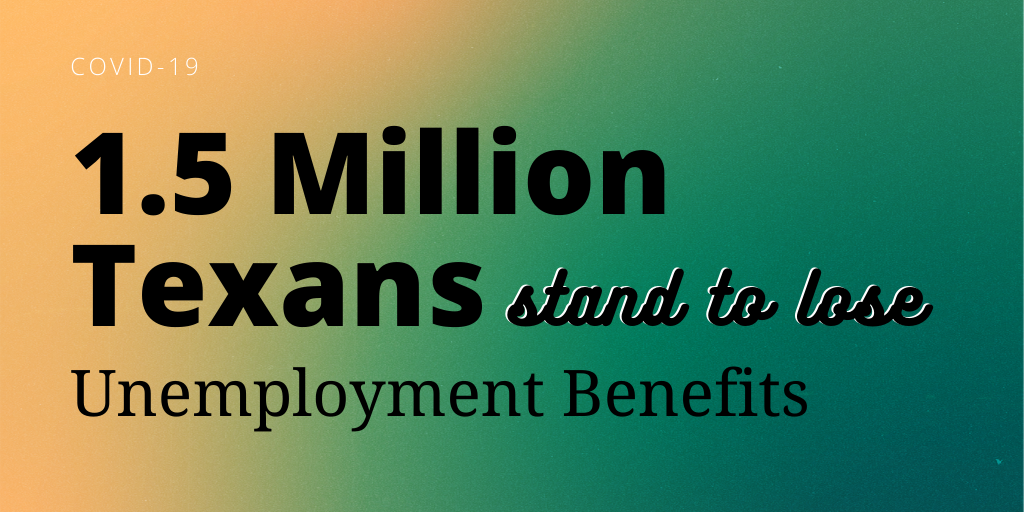 More than 1.5 million unemployed Texans and their families will lose desperately needed emergency income if the Senate refuses to extend the extra $600 in weekly unemployment payments before the end of July.

Congress enacted the $600 supplement, known as Pandemic Unemployment Compensation (PUC), in March to help people who lost their jobs through no fault of their own. With Texas seeing a returning spike in COVID-19, now is not the time to pull the rug out from under the millions of jobless workers who still cannot safely go back to work or who have no job to go back to. Horrifying results of research from the Aspen Institute project that 2.1 million Texans are at risk of eviction if Congress fails to continue the extended benefits.

Without the recent federal expansion, the Texas unemployment insurance program is far from adequate to support the state’s jobless workers and their families. Failure to extend PUC would leave our hardest impacted communities in financial distress, with just $432 in average weekly unemployment compensation to make ends meet.

Cutting federal unemployment insurance is also an attack on Texas’ Black and brown families, who are facing hardships on every front due to historic and structural racism that has pushed people of color into the lowest-paying jobs with the least job security. Black unemployment is 15.4%, significantly worse than the national rate, and the unemployment rate for Black men actually increased to 16.3% in June, with the widest gap between Black and white unemployment in over five years.

Slashing federal unemployment insurance will also strike a major blow to our state’s economy. Now more than ever, the economy depends on the continued spending by the state’s workers, families, and communities. As  economists have cautioned, many workers would be unable to pay their bills and make other purchases without the $600 federal PUC boost, the loss of which would have a devastating effect on the economy at this moment.

Economists at Moody’s Investor Services have concluded that unemployment benefits are the most effective dollar-for-dollar stimulus to the economy, with each dollar of UI reverberating into $1.61 of economic activity. While the $1,200 cash stimulus payment has helped many struggling households, the stimulus from expanded federal Unemployment Insurance benefits is far more efficient, as the cash stimulus isn’t able to target those who actually need it. Many of these payments end up in savings rather than being put back into the economy to support business and jobs.

Nationwide, it is estimated that the federal relief will save  5.1 million jobs over the next year. In Texas, the weekly $600 payments will boost the state’s GDP by 2.7% and save more than 364,000 jobs. The state’s economy is at risk of significant contraction without this extension.

Texas Senators John Cornyn and Ted Cruz should listen to their constituents and acknowledge that the public is strongly behind the nation’s unemployed families, with  75% of registered voters—including 67% of Republicans—supporting either maintaining or increasing unemployment aid. Our policymakers must do what’s right and extend the federal jobless aid without delay.