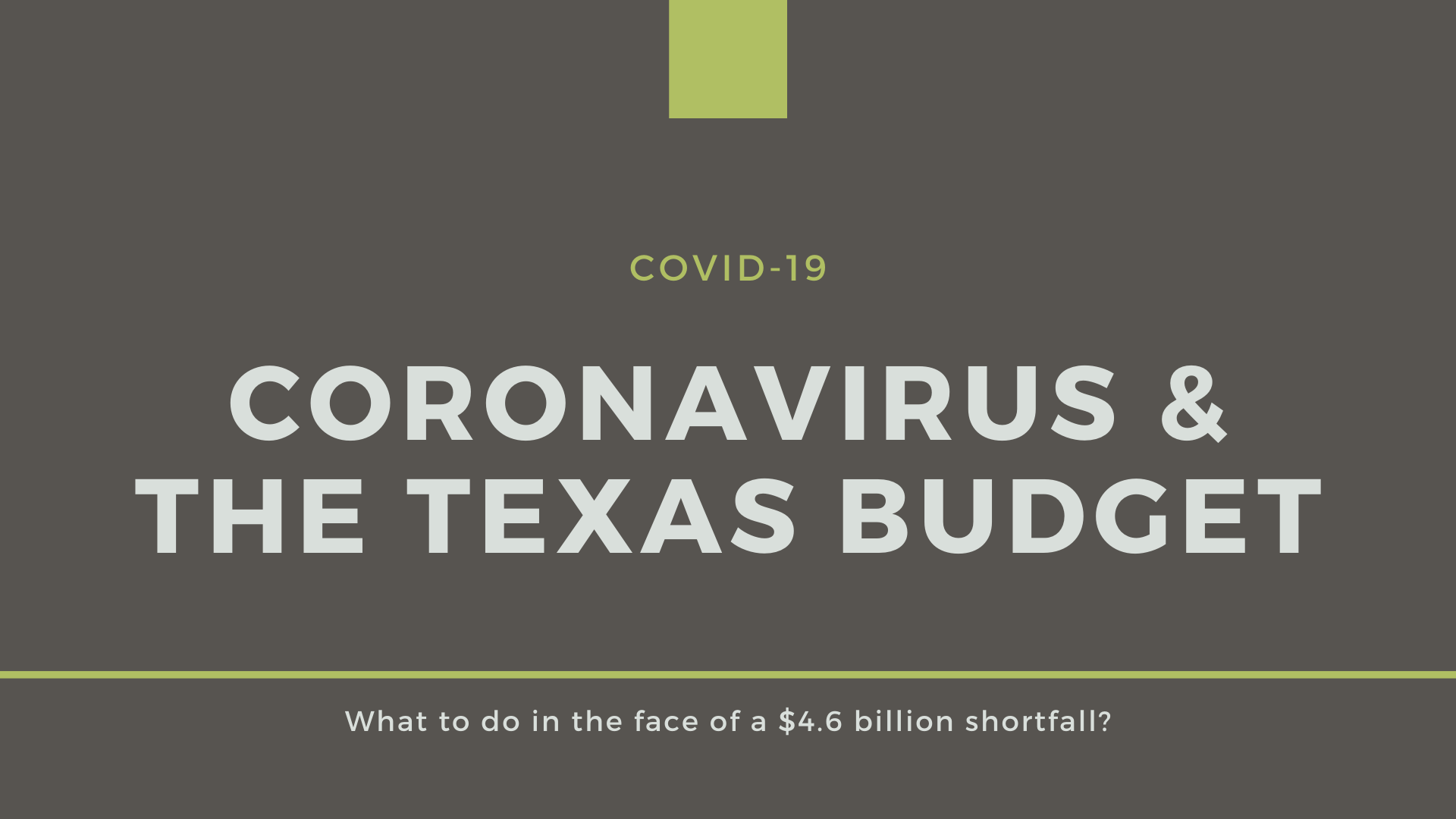 Making sure every Texan has what they need to come through the COVID-19-induced health and economic crisis safely must be the top priority of state lawmakers as they make budget decisions. Today’s announcement by Comptroller Glenn Hegar that the state budget faces a potential $4.6 billion General Revenue shortfall through 2021 makes it even more important that the Legislature uses the Economic Stabilization Fund and that Congress provides more aid to Texas and other states for public schools, higher education, and health and human services — more than 80 percent of our state’s General Revenue budget.

Update on the Worsening Revenue Situation

Usually, Texas budget-writers don’t receive a revised revenue estimate during the legislative interim — a new revenue estimate isn’t provided until the regular session begins (in January of odd-numbered years). However, since early March 2020, Texas Comptroller Glenn Hegar indicated he would provide a revenue update in July. Today’s revision comes after months of sales tax declines triggered by oil market volatility and the economic recession caused  by the COVID-19 pandemic.

The Comptroller’s revised revenue forecast estimates that, instead of an almost $3 billion General Revenue balance for fiscal 2021 anticipated in Fall 2019, the state could end this upcoming year in the red by almost $4.6 billion. That figure will change as more unknowns about the Texas budget are resolved in the months ahead:  the local property tax revenue share of public schools; additional demands for Medicaid-supported health care; another round of Congressional aid to states that could be used to deal with revenue declines; and reductions in state services.

The Rainy Day Fund is key to addressing the TX revenue shortfall, but there’s more the #TXlege can do.

Along with updating the General Revenue forecast, the Comptroller revised the expected balance of the Economic Stabilization Fund (ESF, also known as the Rainy Day Fund) to $8.8 billion by the end of fiscal 2021. The ESF, created after the energy-crash budget woes that Texas experienced in the late 1980s, was designed to replace a significant drop in state General Revenue. The 2011 Legislature was willing to use $3.2 billion from the ESF to help close the 2011 revenue shortfall, but chose to not use the fund in the 2012-13 budget, instead cutting more than $5 billion from public schools and almost $6 billion from other state services. Repeating this mistake in 2021 could mean retreating from the 2019 Legislature’s new promise to improve PreK-12 education. No state leader has proposed reducing the commitments to schools that were made in HB 3, but if the revenue situation worsens, the inevitable calls for cuts that provide critical services to Texans should be rejected. Using the ESF will ensure that, rather than taking away the much-needed revenue dedicated to our public education system, our state makes necessary strides towards equitable education for every Texan.

Available for #txlege to deal with this: $8.8 billion in the Economic Stabilization Fund. https://t.co/0AVxzbLsi5

We will continue to point out that cutting general revenue support for schools or other state-supported services is not going to pull Texans out of this recession and will instead slow the recovery. Even worse, reducing investment in PreK-12 public education or higher education financial aid could have generational impacts on future working Texans.

Briefing state lawmakers, Comptroller refers more than once to “unprecedented uncertainty” in his General Revenue revision. One thing we do know: cuts to #txed & HHS – 83% of GR services – only make it less likely that our communities will have resources needed to recover. pic.twitter.com/2IdmoXRdn0