Access and Affordability: An Update on Higher Education in Texas

Equitable education is the vehicle for social and economic mobility. When all Texans have access to quality education, it can lead to better life outcomes and job opportunities. This is increasingly visible within postsecondary education. As we navigate through this pandemic, we must ensure that we are providing students with the support they need to successfully attain their postsecondary education goals and to be prepared for economic growth. Therefore, higher education opportunities must be both accessible and affordable for all Texans. Access to postsecondary education allows for Texas families to earn better wages, meet workforce qualifications, and experience an increased quality of life.

Two constant threats to these goals are 1) the increasing cost of tuition and fees coupled with declining state contribution, and 2) the increasing amount of student loan debt.

In 2020, there were over 1.3 million Texans enrolled in higher education. Of this amount, 66% consisted of non-white Texans, and 59% were classified as female students. Early on, the impact of the pandemic was visible within Texas’ higher education enrollment through the fall of 2020 — there was a 4% decline in college enrollment across all institution types. Enrollment for most populations has declined during the pandemic across all racial and ethnic groups, except for Texas’ Asian population — which saw a 1% increase in enrollment. Aside from our international population, Hispanic (4.9%) and African American (4.8%) families saw the highest decrease in enrollment. Data collected during fall 2020 shows that 31% of the surveyed Texas population had canceled all their plans to take classes, with the largest percent seen amongst students identifying as two or more races and as Hispanic. 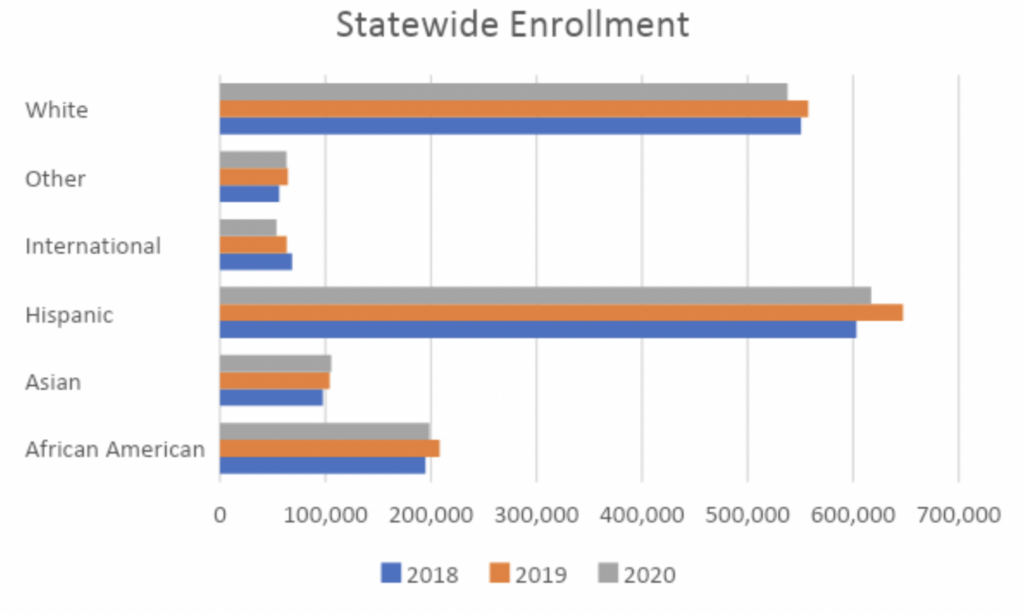 Despite the decreases in college enrollment, for over two decades, Texas families have seen a steady increase in the cost of tuition and fees and a decrease in state investment in colleges and universities. When considering starting a degree or certificate program, potential students often wonder how much it will cost them and what will be the lingering cost after completion. In other words, the cost of tuition and fees and the amount of loan debt influences the decision to attend and persist in higher education.

Even with the onset of the pandemic, costs have continued to rise. Between 2019 and 2021, the average cost of tuition and fees steadily increased within public and private institutions. Some universities have stepped up to alleviate the cost of tuition on Texas families by offering free tuition and fees to students within specific income brackets. For example, the University of Texas Rio Grande Valley has committed to covering tuition and fees for students from families with an income of $100,000 or less starting in fall 2022. Similar forms of free tuition programs are available at other institutions, like the Texas Advance Commitment at UT Austin, the Aggie Assurance plan at Texas A&M University, and the Bold Promise program at the University of Texas at San Antonio. 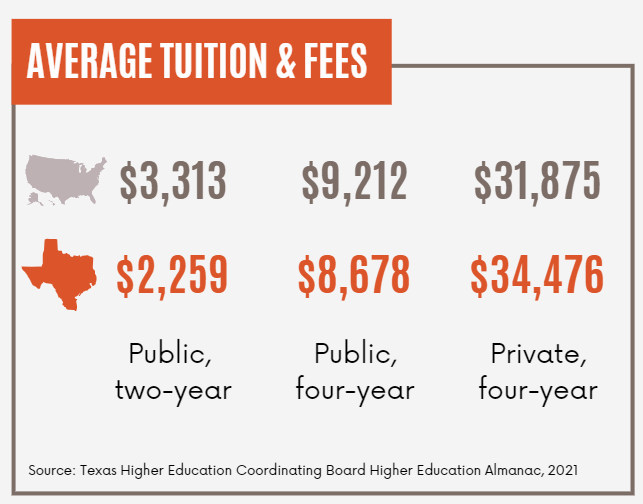 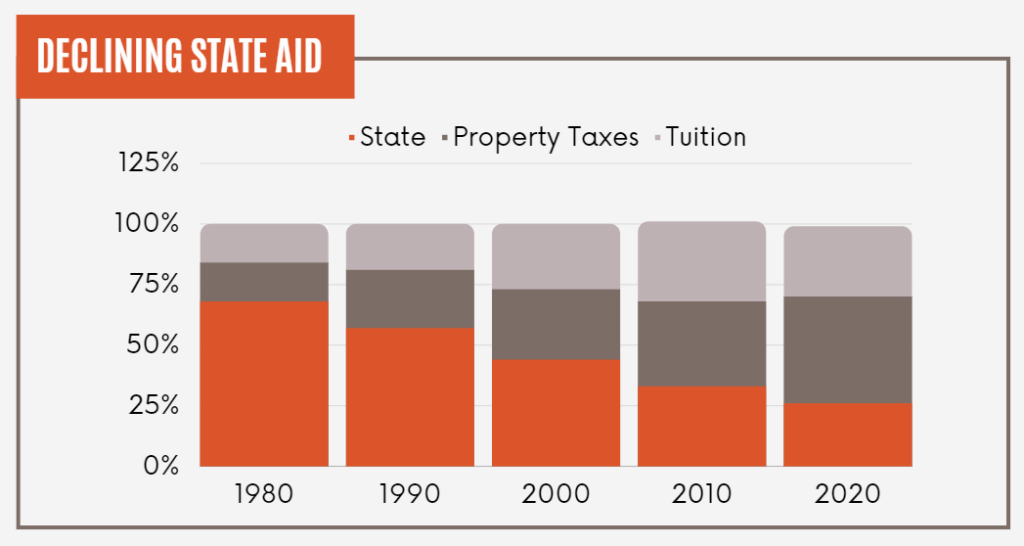 To offset some of the cost of postsecondary education, Texas does have several financial aid programs. The largest state financial aid program is the Toward Excellence, Access, and Success Grant (TEXAS Grant). Although the Texas Legislature provided over $786 million for the program during 2018 and 2019, the increase is not meeting the growing needs of students due to increase in student eligibility and increasing tuition and fees. Therefore, the average awards only cover 54% of the average amount of tuition and fees in Texas. Not only is an increase in the amount of the TEXAS grant needed, but eligibility must also be expanded to returning students, GED students, and students who entered the workforce full-time after graduating high school. Additional steps are also needed to regulate the increasing cost of tuition and fees.

As the second-biggest state in the nation, Texas has the second-highest student loan debt. Debt impacts the way Texans determine if postsecondary education is both accessible and affordable. Of the 2014 cohort, 47% of the graduates completed their programs with debt. Even students who were unable to complete their degree still had unpaid loans — 34% of the same cohort had debt that averaged to $11,640.

When looking at student loan debt as a percentage of the wages 2018 graduates earned their first year after graduation, their amount of debt-to-income differs across race and ethnicity groups and institution type. Black students who graduate from a four-year college or university have an 85% debt to income ratio, whereas Hispanic and white students only had a debt that was 56% and 55% of the income they earned their first year, respectively. Debt over half of what an individual makes can already feel burdensome, and much larger ratios for Black students add to the social and economic pressures they face. Both factors indicate and contribute to the systemic oppression they face daily. Black students are often required to borrow more to persist through school, and they face discrimination within hiring practices that result in them having less access to higher paying jobs. Black students who graduate from a two-year institution have a 49% debt-to-income ratio, which is higher than all other racial groups (32% for Hispanic graduates and 36% for white graduates).

In 2020, Texas had an average debt level of $25,101 for graduates of a public four-year institution. Yet two of Texas’ publicly funded Historical Black Colleges and Universities (HBCUs) had much higher debt levels for their graduates, averaging $32,754. Limited access to fewer resources, which stems from the role of systemic racism, leads to more debt. Although these universities have higher debts, they also serve students who have higher levels of financial need and spend a larger portion of their funds on student services and scholarships. Universities like Prairie View A&M and Texas Southern University serve students from diverse backgrounds, yet Texas has failed to prioritize funding for HBCUs. 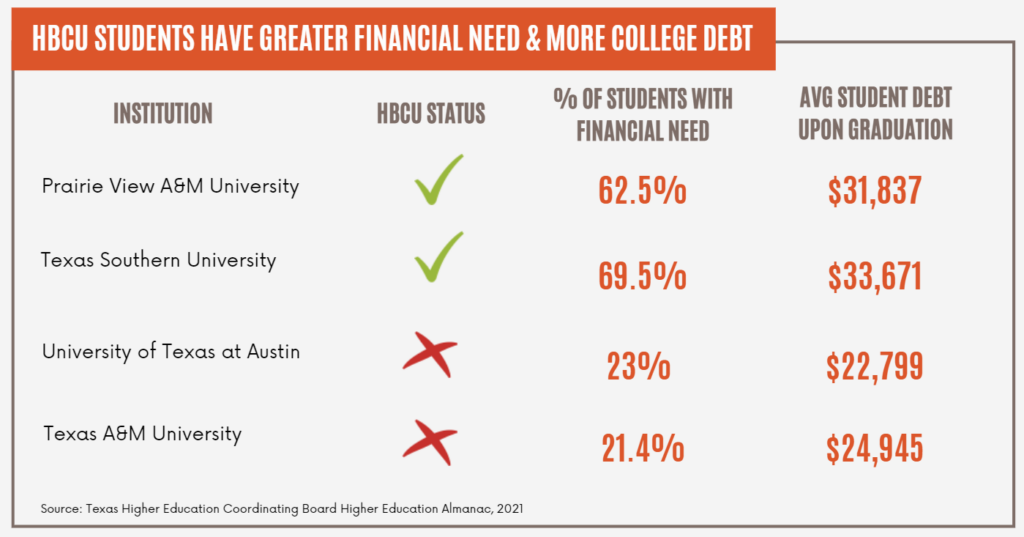 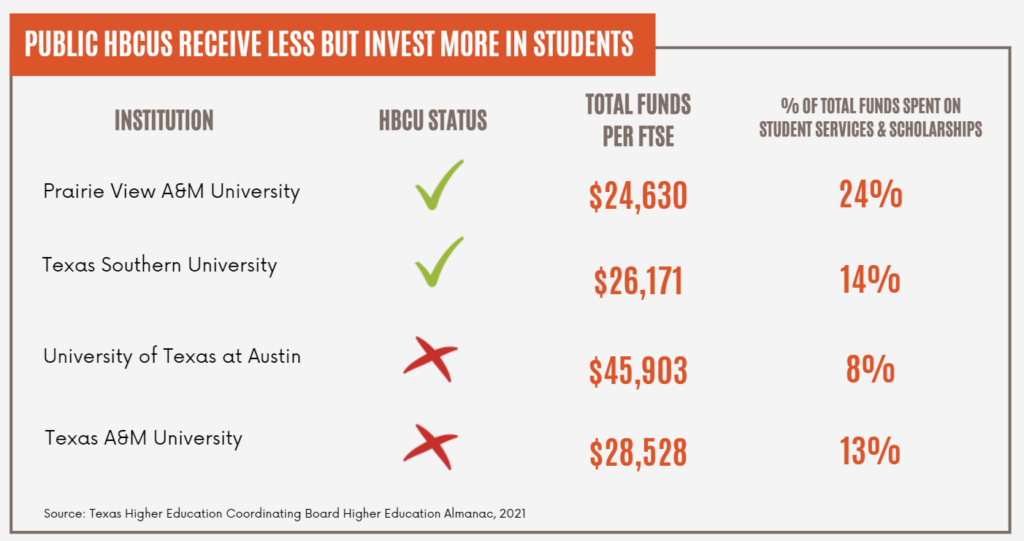 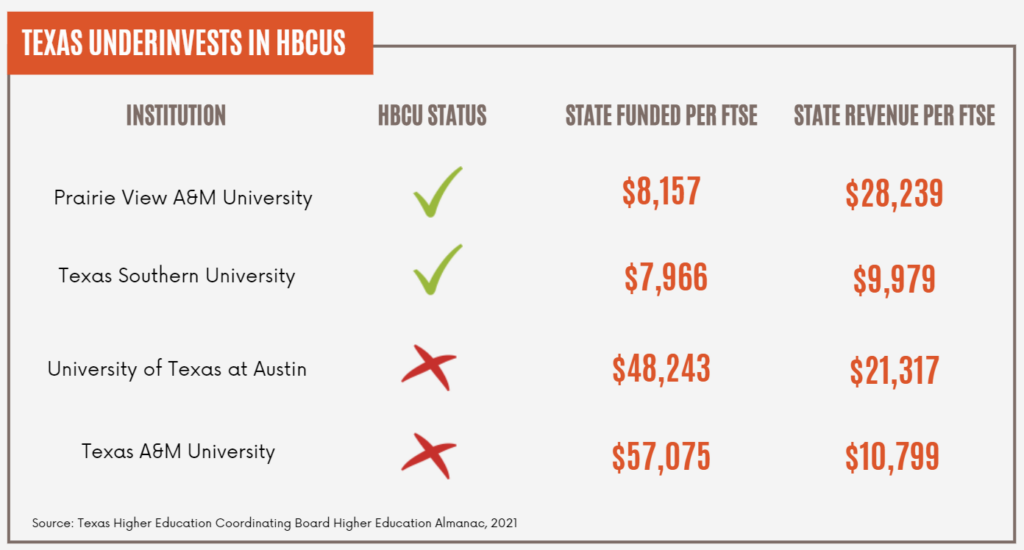 To ensure that postsecondary education is accessible and affordable for all Texans, Texas needs to: