What to Expect from the 2020 Census Data Release

Census data is an essential source of information for community decision-making. It underlies redistricting processes, funding allocation, and the ability of state and local governments to identify and work toward closing equity gaps. This year is a particularly technical one for those that follow Census data releases, because it includes several Decennial Census products (redistricting files with population counts, demographics, and more), plus significant changes to annual American Community Survey (ACS) data (estimates of health insurance coverage and other socioeconomic characteristics), both impacted by the pandemic.

Redistricting data is released for states and smaller geographies every ten years, including:

On August 12, the U.S. Census Bureau released the legacy format of  2020 redistricting data for experienced data users. A more user-friendly version of redistricting data will be released on September 16th. Redistricting data is used to  redraw congressional and state legislative districts to account for demographic changes that have occurred since the 2010 Census. Since the Texas Legislature is responsible for redrawing congressional districts, Gov. Abbott has called a special session this fall for legislative redistricting. This process must be equitable, inclusive, and community-led. Read more about our community-led work with Texas Counts  here.

The 2020 Census also made changes to its Hispanic origin and race questions (read more about changes  here). These improved race and ethnicity questions show that the United States is  more multiracial than previously assumed, and helps us make better decisions to equitably serve all Texans. New Census data shows that people of color accounted for 95% of Texas’ population growth since 2010, with the Hispanic population accounting for 49.3% of all growth. Overall, the state Hispanic population grew by 20.9%, the Black population by 19.2%, and the Asian population by 64.4% since 2010. However, there are still people who are left out of these race and ethnicity measures. For example, despite decade-long calls from Middle Eastern and North African communities urging the Census Bureau to include a Middle Eastern and North African race category, the Bureau failed to add an option for these communities. Read more about how the Census has measured race and ethnicity over time  here.

While the 2020 Decennial Census strives to achieve a complete count every ten years and is the basis for redistricting, the American Community Survey (ACS) uses annual estimates to help communities measure other changes affecting households like economic status, health insurance coverage, housing, social characteristics, and more. The Census Bureau has announced that it will not be releasing its standard ACS 1-Year Estimates, typically updated in September each year, due to poor data quality because of the  pandemic. People who were most affected by the pandemic, such as people with lower income levels, lower educational attainment, and who were less likely to own their home, were among those with particularly high nonresponse rates, largely due to the pressures the pandemic put on  essential workers. Instead, the Census Bureau will be releasing  ACS 1-Year Experimental Estimates in November of 2021. However, the Census Bureau cautions against using these experimental estimates as a replacement for the standard ACS 1-Year Estimates. It is hopefully possible, awaiting further guidance from the Census Bureau, that ACS 5-Year Estimates at the end of the year will be reliable enough to use for trend-tracking and decision-making at the state and local level.

For those who typically use the ACS 1-Year Estimates to obtain annual poverty and income estimates for Texas in September, the Current Population Survey Annual Social and Economic Supplement (CPS ASEC) can be used. However, caution should be exercised if using the CPS ASEC at the state level, because it uses a much smaller sample size of 98,000 households compared to the ACS’s sample of 3.5 million households — for that reason, we recommend using multi-year estimates and looking at measures of reliability. The CPS ASEC also reflects data collection for different time periods than the ACS (e.g., surveying for the past calendar year vs. from the point in time when interviewed). 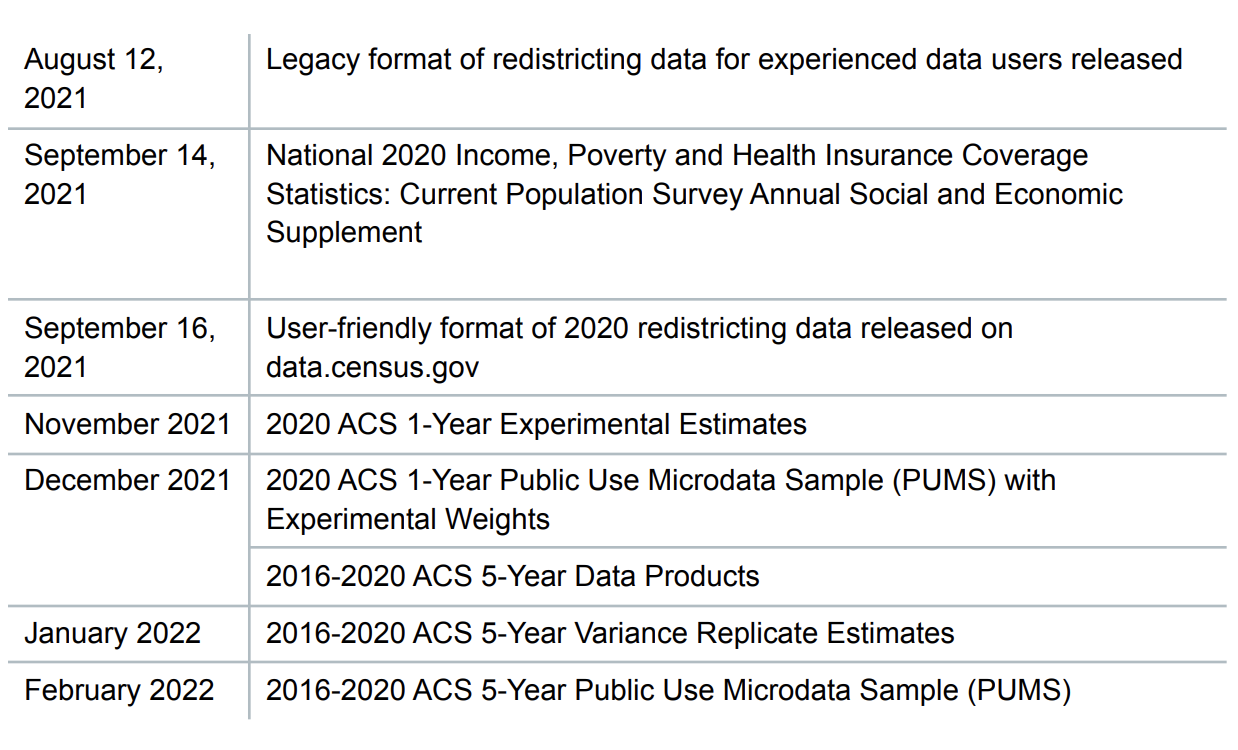 Every Texan plans to release periodic updates through the fall based on what information becomes available for updated health insurance, poverty, and income data for Texas, plus resources for redistricting data analysis that support communities engaging in an equitable and accessible redistricting process.