As Every Texan stated in announcing our American Rescue Plan (ARP) toolkit for cities and counties, we believe state and local officials must be intentional about engaging with Texans who are most affected by the pandemic, such as people of color, families, and essential workers. The experiences and voices of affected Texans are critical in understanding the needs of communities across the state. State and local leaders will make better choices and see better outcomes if they commit to engaging communities and leading a robust stakeholder process to inform a plan to equitably distribute ARP fiscal recovery and other federal aid.

In particular, legislators who will be shaping the allocation of the state government’s $16 billion in fiscal recovery funds need to consider the ideas and recommendations of community stakeholders for planning equitable recovery efforts.

An opportunity for this may have arrived sooner than originally anticipated. In response to the COVID-19 Delta variant and the near-catastrophic public health emergencies raging across Texas, Gov. Abbott included federal relief appropriations on his agenda for the second special session, which began August 7. This could mean that the special session will result in legislation that spends some of the state ARP funds. The potential health care expenses to be covered by “unappropriated available revenues” includes the following:

Though it’s not clear whether “unappropriated available revenue” refers only to federal dollars the state could allocate, or general revenue or Economic Stabilization Funds that are available, this topic could be taken up in the upcoming weeks, or in another special session. No related legislation has been filed as of August 17. On August 11, however, the governor did announce that the state would provide funds to pay for 2,500 medical personnel needed by hospitals and other health care facilities across Texas. The announcement did not specify the source of the funds. On August 18, the governor announced that smaller cities and towns (populations under 50,000) could start receiving their ARP fiscal recovery funds through the Texas Division of Emergency Management.

Every Texan will provide updates on any relevant developments as soon as we can, especially any opportunities for public input. We are also working on ways to highlight and promote our advocacy partners’ top priorities for using the state’s fiscal recovery funds once the immediate crisis posed by the Delta variant has subsided. Meanwhile, Every Texan has summarized below how the state used the $8 billion in federal relief funds it received in 2020’s Coronavirus Aid, Relief, and Economic Security (CARES) Act, and how a lack of legislative involvement in those decisions spurred a different approach to using the new ARP aid.

The U.S. Congress approved the $2 trillion CARES Act in March 2020, when the Texas legislature was not in session. Of the estimated $18 billion in CARES Act aid that could potentially be allocated through Texas state agencies, $8 billion was provided through the Coronavirus Relief Fund (CRF). Eighteen local governments in Texas received another $3.2 billion in CRF directly from the U.S. Treasury — not through the state — because they are each home to at least half a million residents.

The CARES Act required state and local government recipients of the Coronavirus Relief Fund to use the aid for expenditures that were:

In  May 2020, the governor announced that through the Texas Division of Emergency Management (TDEM), Texas localities too small (fewer than 500,000 residents) to have received CRF directly from the federal government were eligible to receive up to $1.85 billion from the state portion of the CRF. In the end, only $583 million was “re-granted” in this way, according to a March 2021 update by the governor’s office.

That regrant and other uses of state CRF aid are summarized in the chart below. The $4 billion in the CRF that paid for the salaries of state employees carrying out public health and public safety functions — including $1.4 billion for the Texas Department of Criminal Justice, in fiscal 2021 — was officially approved by the legislature during the 87th regular session, when the state Senate and House voted on the supplemental budget bill House Bill 2. Decisions on how to use the other half of the state’s CRF aid were primarily made by the governor’s office, with no formal public input or formal interim legislative oversight, because of the need to respond quickly throughout 2020 to the needs of localities for COVID-19 testing, masks, hospital staff, and supplies. 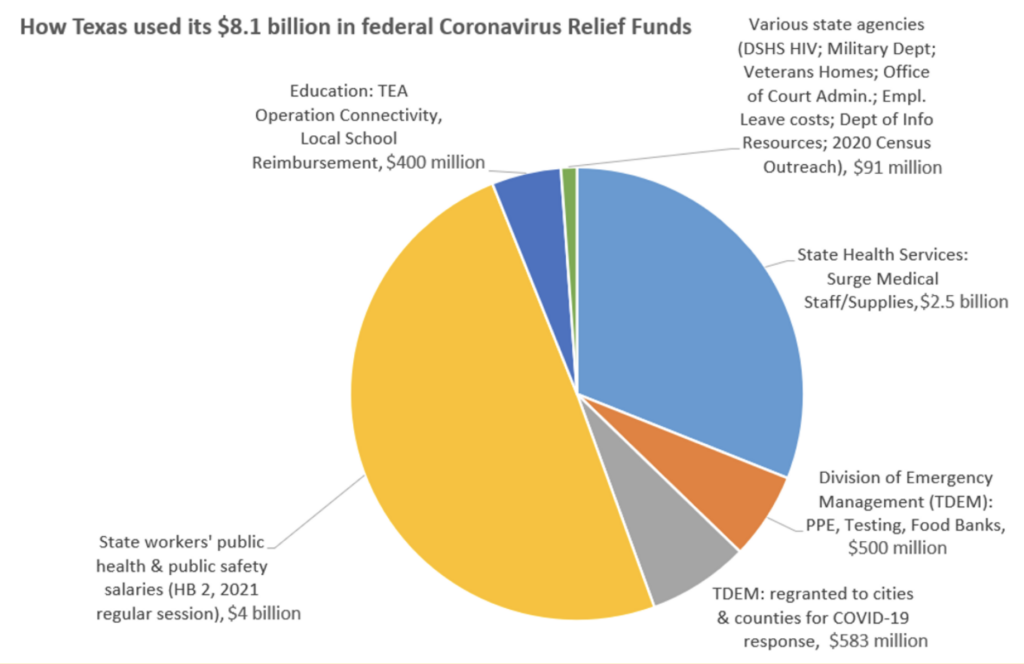 On March 11, Congress approved the American Rescue Plan Act, another round of nearly $2 trillion of recovery aid for individuals, state and local governments, and businesses. The ARP includes the State and Local Fiscal Recovery Fund, which could give the Texas state government as much as $16 billion over two years, as well as $10.5 billion for general local governments: $5.7 billion for counties, $3.4 billion for major cities (those with populations of 50,000 or more), and $1.4 billion for smaller cities. The state’s amount could turn out to be lower, depending on how quickly the unemployment rate improves compared to the national situation.

In many ways, the allowable uses of the Fiscal Recovery Fund by state and local governments are similar to those that applied to the Coronavirus Relief Funds. According to the State Comptroller, ARP funds can be used to:

The comptroller noted there are prohibited uses: ARP funds cannot be used by state or local governments to offset any new tax cuts or delay the imposition of any tax or tax increase, nor can they be used to support a public employee pension fund.

Unlike 2020’s CRF, the Fiscal Recovery Fund’s availability was announced while the Texas Legislature was in session. House members in particular expressed a clear desire that the legislature have a say in deciding how unallocated federal aid be used, rather than leaving most of the decisions to the governor in the interim. On a 147-0 vote, for instance, the House of Representatives added the following rider to its version of the 2022-2023 state budget:

The overwhelming support for the full involvement of the Legislature in allocating federal COVID-19 relief aid was also seen as a rejection of House Bill 2021. That proposal would have created a select, 10-member legislative board to make decisions on how to spend ARP fiscal recovery dollars and other unallocated aid, with the governor’s approval, without requiring a session of the legislature.

Before the regular session ended and a final budget compromise was reached, the House language was stripped and replaced with this very different provision: 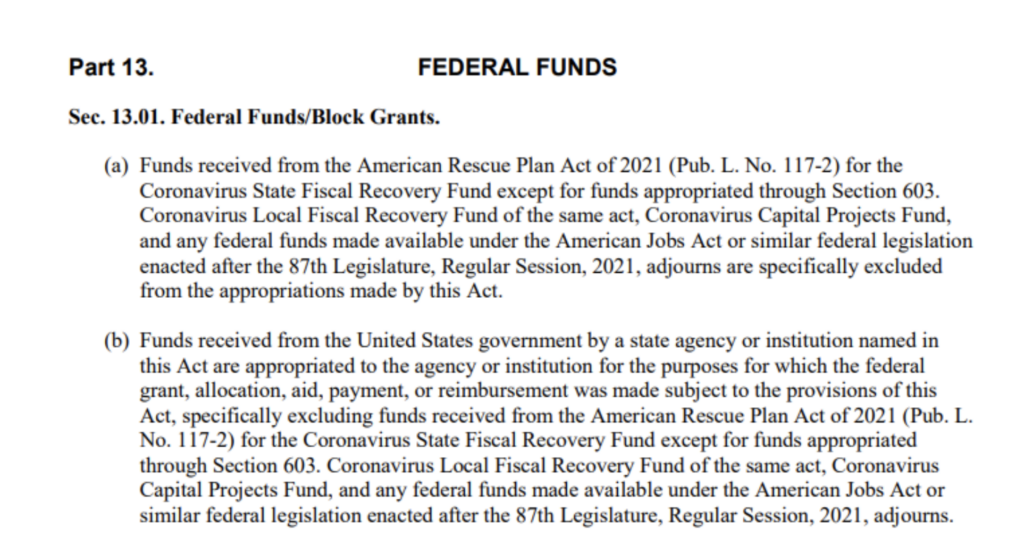 Also in late May of the regular session, the governor announced that he had promised the lieutenant governor, speaker, and top legislative budget writers that he would add allocation of the $16 billion in ARP state fiscal recovery funds to the agenda of a special session in Fall 2021, when redistricting would be carried out.

On August 5, the governor announced the items to be considered during the second special session, almost all of which had also been on the first called session’s agenda. As mentioned above, he added one new item: “legislation providing appropriations from unappropriated available revenues for COVID-19-related healthcare expenses.”  The reference to $10.5 billion in ARP funds for local governments includes $1.4 billion which the Texas Division of Emergency Management is distributing to cities with a population below 50,000. Remaining funds are allocated directly by the federal government to counties and major cities, many of which have already spent or budgeted the first half of their ARP allocation. (State law says that county fiscal years begin on January 1, unless a county’s commissioner’s court adopts a start date of October 1, or March 1 for a county with a population of at least 3.3 million. Cities can set their own fiscal year start dates; like counties, many cities use October 1.)

No updated estimate is available on how much in local ARP funds remains unallocated from the first year’s $5.1 billion. There’s no doubt that will be explored during Senate and House hearings when relevant bills are considered in the weeks and months ahead.