The newest COVID-19 relief law, the American Rescue Plan Act (ARPA), offers Texas a “bonus payment” over a two-year period, if Texas accepts federal funds to provide Medicaid health coverage for poor and near-poor adults—funds that 38 other states have already accepted. These dollars are in addition to the 90% matching funds already available for this population — funds that will endure beyond the 2-year bonus.

This could be done with a simple Medicaid expansion like Louisiana or New Mexico, or an 1115 waiver like Arkansas or Indiana.  Either way, Texas could use these dollars to design its own coverage initiative, including co-payments and specialized benefits, one designed to promote value and accountability.

14 states are eligible for the bonus funds: Alabama, Florida, Georgia, Kansas, Mississippi, North Carolina, South Carolina, South Dakota, Tennessee, Texas, Wisconsin, and Wyoming, as well as Missouri and Oklahoma, which both adopted expansion via ballot initiative but have not yet implemented it.

Here’s the latest on the new “Medicaid expansion bonus,” how it fits in with the savings Texas is estimated to gain if we implement Medicaid expansion, and how it could interact with the big increase in federal Medicaid dollars Texas has already been getting for over a year as part of federal  COVID-19 relief.

Texas (and any of the other eleven states that haven’t yet covered their lowest-income workers) would get a 5 percentage point increase in the state’s “regular” federal Medicaid match rate (FMAP) for two years if they implement the expansion.  Texas’ 2021 “regular” federal Medicaid share is 61.81; or in other words, the federal government pays just under 62 cents of every dollar of care Texas Medicaid delivers. With the 5 additional points, the federal government would pay just under 67 cents of each dollar for two years.  And if that doesn’t sound like much, keep in mind that Texas Medicaid is a more than $40 billion a year program!

One potential point of confusion

This increase in the federal matching funds would apply to Texas’ large current Medicaid population for two years; the newly covered adults would be covered at an even higher federal match of 90 cents on the dollar permanently (not limited to 2 years). More below on this!

How much money are we talking about?

Right now, we don’t have official estimates from Texas HHSC (the Medicaid agency) or the Legislative Budget Board.  What we have are estimates from two national think tanks, and one Texas think tank, ranging from $3 billion to $6 billion in new federal dollars , over the two year period.  That’s a big range, but one thing that’s clear is that this new law makes Medicaid expansion even more economically sound for Texas.  And, regardless of whose estimate you use, the new bonus would pay for multiple years of Texas’ 10% share of the costs of Medicaid expansion.

The 3 estimates available today are: 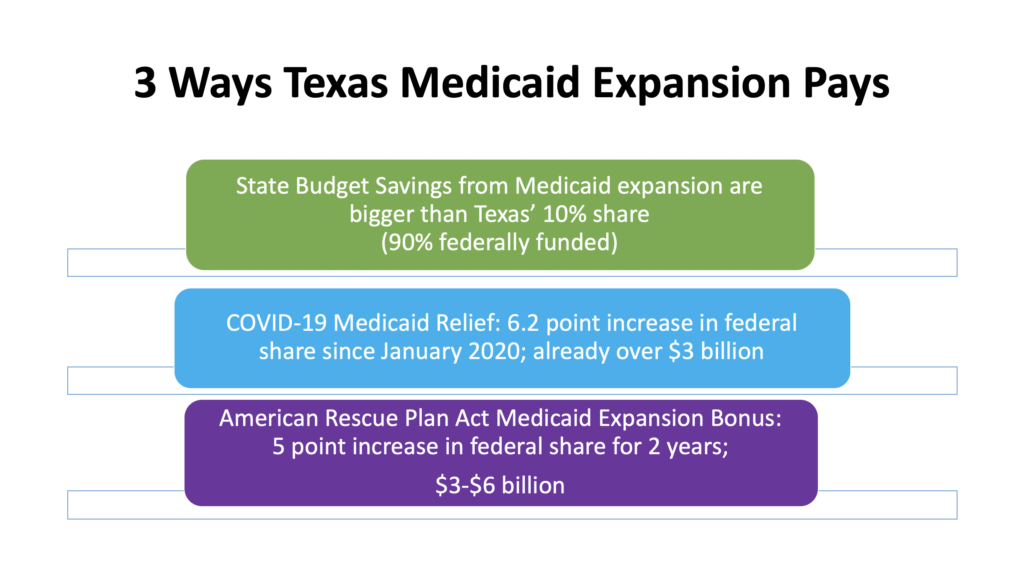 This bonus funding would be added to/on top of the billions Texas has received in current COVID-19 Medicaid Relief Funds.

If the state expands Medicaid while the current COVID-19 Public Health Emergency is in place (the Biden administration has notified states the PHE will last at least until December 2021), Texas would get this new additional 5 percentage point increase for Medicaid expansion, and the 6.2 points Texas has received since January 2020.  That would mean that during any months when the two overlap, Texas would get both increases11.2 points added to our federal match.  In the 2021 example above, instead of the “regular” 61.81, Texas would get just over 73 cents of every dollar paid for by the federal government.

We don’t yet have up-to-date numbers on exactly how much Texas has already received in additional federal Medicaid dollars; HHSC documents have listed $3.1 billion additional federal dollars received as of October 2020.  And, that amount will continue to grow through the end of 2021.

The new bonus would add to the economic benefit to Texas from the 90% match for adults newly eligible for coverage.

A 90% federal match is guaranteed to Texas for the newly covered adults under Medicaid expansion.  That is obviously higher than the increased match rates discussed above, and that is what the state would get for that new group of adults if expansion is launched.  Under law, the federal government will pay 90 cents of each dollar of health care for that group, with no expiration date.

The COVID-19 relief Medicaid match-rate increase from 2020 (6.2 points), and the new bonus increase Texas could get for Medicaid expansion (5 points) both increase the federal contribution to the health care costs for the current Texas Medicaid population: about 4.2 million Texans including children, seniors in poverty, adults and kids with disabilities, pregnant women, and a very small number of parents.

Texas-based studies released in 2020 and 2021 project that extending coverage will actually save money for the state budget, or at worst have only a trivial cost (less than $2 per person per year).  Those savings are separate and apart from the additional Medicaid federal funding from the 2020 COVID-19 relief, and from the new ARPA bonus option.  Multiple studies can be found at the Episcopal Health Foundation’s website, and the Texas 2036 website includes their estimates of the positive fiscal impacts of Medicaid expansion.

View this report in a downloadable, printable version here.