via email to Committee Clerk Sergio Cavazos at Sergio.Cavazos_HC@house.texas.gov

Dear Chairman Lucio and Members of the Committee:

Every Texan (formerly Center for Public Policy Priorities), appreciates the opportunity to submit information in response to your RFI regarding Senate Bill 1940:

Interim Charge 1: [Monitor] SB 1940, which extends to August 31, 2021, TDI’s authority to revise and administer the temporary health insurance risk pool to the extent federal funds are available. Study ways to foster a competitive market and reduce the uninsured rate, including by exploring flexibility available through federal waivers.

At Every Texan, we envision a Texas where people of all backgrounds can contribute to and share in the prosperity of our state. Texas faces long-standing challenges to optimal health, including the nation’s highest uninsured rates, and steep financial and systemic barriers for those who have insurance. We work to improve public policies to make affordable, comprehensive care a reality for every Texan.

If Texas pursues a 1332 waiver, as is authorized temporarily in SB 1940, it should do so with the aim of covering more Texans with quality, affordable health insurance and only as part of a comprehensive state approach to significantly reduce the state’s high uninsured rate. A 1332 waiver alone will be insufficient to address Texas’ substantial uninsured challenge.

Texas has the highest uninsured rate in the nation and it’s getting worse.  Even before staggering job losses due to COVID-19, 5 million Texans (18%) were uninsured.[i] In just March and April, 1.6 million Texans lost job-based health insurance because of COVID-related job losses.[ii] Only half of Texans who lose job-based health insurance during the pandemic will find other coverage; the other half will become uninsured.[iii]

The vast majority of uninsured Texans are U.S. citizens; have low or moderate incomes; and work or are in a family with a worker, but are not offered or cannot afford health insurance with a low-wage job.[iv] Texas policymakers can use a range of available tools to lower Texas’ high uninsured rate and reduce the burden it places on families, communities, and our health care system (see Figure 1).

Along with any 1332 waiver, Texas must accept federal funding to expand Medicaid coverage to Texas adults below 138% of the federal poverty level, which includes low-wage working parents and adults caring for a disabled family member.[v] A 1332 waiver cannot extend coverage to working poor adults in the “coverage gap” who are excluded from Texas Medicaid today, but earn too little to get Marketplace subsidies under federal law.[vi] Federal funding to cover working poor adults can only be accessed through Medicaid expansion or a Medicaid 1115 waiver. All 14 states with approved 1332 “reinsurance” waivers today have already closed their Medicaid coverage gap, ensuring that uninsured adults in low-wage jobs that do not offer coverage have access to Medicaid.[vii]

Reinsurance reduces the price of full-cost premiums for people who do not qualify for Marketplace subsidies. It does not further reduce premiums for people who have Marketplace subsidies.[ix] This primarily benefits higher-income individuals (with incomes over 400% of the federal poverty level or about $51,000/year for an individual and $105,000/year for a family of four in 2020) and others ineligible for subsidies. Unsubsidized enrollment in the Texas individual market has declined since 2016, while subsidized enrollment has increased (see Figure 2).

1332 reinsurance waivers in other states have reduced full-cost, individual-market premiums by 17% on average.[x] These states generally anticipate a relatively small increase in coverage to result. Most states that have established a 1332 reinsurance program estimate that coverage in the individual insurance market would increase from 1-3% (see Figure 3).[xi] A recent market analysis estimates that 1.3 million Texans have individual market coverage today.[xii] Growth of 1-3% in Texas would translate to an additional 13,000 – 39,000 people covered.

Reducing premiums for higher-income individuals to cover tens of thousands of additional Texans is a worthy goal that lawmakers should pursue, but not without also ensuring an affordable coverage option for 1.5 million uninsured, low-income Texans[xiii] who would be eligible under Medicaid expansion.

Reinsurance payments come from federal “pass-through” funding available through 1332 waivers, combined with a state share. Among states with 1332 reinsurance programs, the state share of program costs ranges from 3% to 56%, with states financing about one-third of the program’s costs, on average.[xiv]

Most states finance their state share through an assessment on health insurers, though a few states use other methods including General Revenue, provider assessments, and penalties from state-level individual coverage mandates (see Figure 4).

The Affordable Care Act (ACA) greatly expanded access to individual market coverage by creating sliding-scale subsidies for people with incomes from 100-400% of the federal poverty level and prohibiting insurers from denying coverage or charging more because of pre-existing conditions. Under the ACA, coverage in the individual market has grown and Texas has seen historic declines in its uninsured rate (though Texas still has the highest uninsured rate and population).[xv] More than 1 million Texans have enrolled in 2020 Marketplace coverage, and 9-in-10 of them receive a federally funded subsidy to make monthly premiums affordable.[xvi] In addition, 6-in-10 have plans with reduced out-of-pocket costs, like deductibles and copays, to improve access to care. Maintaining adequate financial assistance is critical to ensure that both health coverage and health care are affordable for Texans with lower incomes.

Any Texas 1332 waiver must immediately result in more Texans getting enrolled in coverage that is as affordable (premiums and out-of-pocket costs), with benefits that are as comprehensive, and with pre-existing condition protections that are as strong as in Texas’ ACA-compliant market today. The 14 states with approved reinsurance waivers have achieved this outcome. Should Texas want to build upon reinsurance in a 1332 waiver, it should consider ways to further address affordability challenges, particularly for consumers with low and moderate incomes.[xvii]

Today, HealthCare.gov gives clear, comparable, and unbiased information to consumers on their health plan options and supports enrollment assistance through agents, community-based organizations, community health centers, and hospitals. It also provides a “no-wrong-door” approach that ensures Marketplace applicants who are Medicaid- or CHIP-eligible get the correct coverage. On top of this, the federal Marketplace already supports direct enrollment through third-party web-brokers and insurers, so that consumers who want to, can enroll without going to HealthCare.gov.

1332 waivers must adhere to strong statutory “guardrails” that require coverage under a waiver to be just as affordable and comprehensive, to cover as many people, and to not increase federal costs. Though a few states have proposed waiver provisions that seek to erode current protections and would violate statutory guardrails, to date, CMS has not approved any of these.[xviii]

The following ideas could run afoul of statutory guardrails, would harm consumers, and should be avoided:

Considerations for a state-based marketplace

Other states and advocates are closely watching Pennsylvania, which plans to switch from HealthCare.gov to a state-based marketplace, hopes to operate its marketplace at a lower cost, and intends to use the savings to fund the state’s 1332 waiver reinsurance program. Pennsylvania’s plan is innovative, but it also presents risks for consumers, as well as costs and challenges to the state. Savings projected at the beginning of a complex and lengthy project could fail to fully materialize. The state is still in the process of building and testing its IT infrastructure and developing consumer assistance functions needed to switch to a state-based marketplace.

Switching to a state-based marketplace is a complex undertaking. Texas should not do it as a means to save money, because the savings may not materialize. It also should not consider such a complicated undertaking if the result would be to merely replicate HealthCare.gov, which works pretty well today.[xxiii] There are, of course, many ways to build upon and improve HealthCare.gov, which could be done by the state or federal government. For changes to benefit marketplace consumers, regardless of whether they are made at the state or federal level, they should lead to increased comprehensive coverage, streamlined enrollment, an improved user experience, increased outreach and enrollment assistance, improved coordination between Medicaid and the Marketplace, and/or other improved consumer protections. Only if Texas has a clear intention and measureable goals to achieve several of these outcomes, not just cost savings, would a discussion about a state-based marketplace make sense.

Thank you for studying this important issue. We stand ready to help as you consider legislative options to ensure that every Texan has access to affordable and comprehensive health coverage. 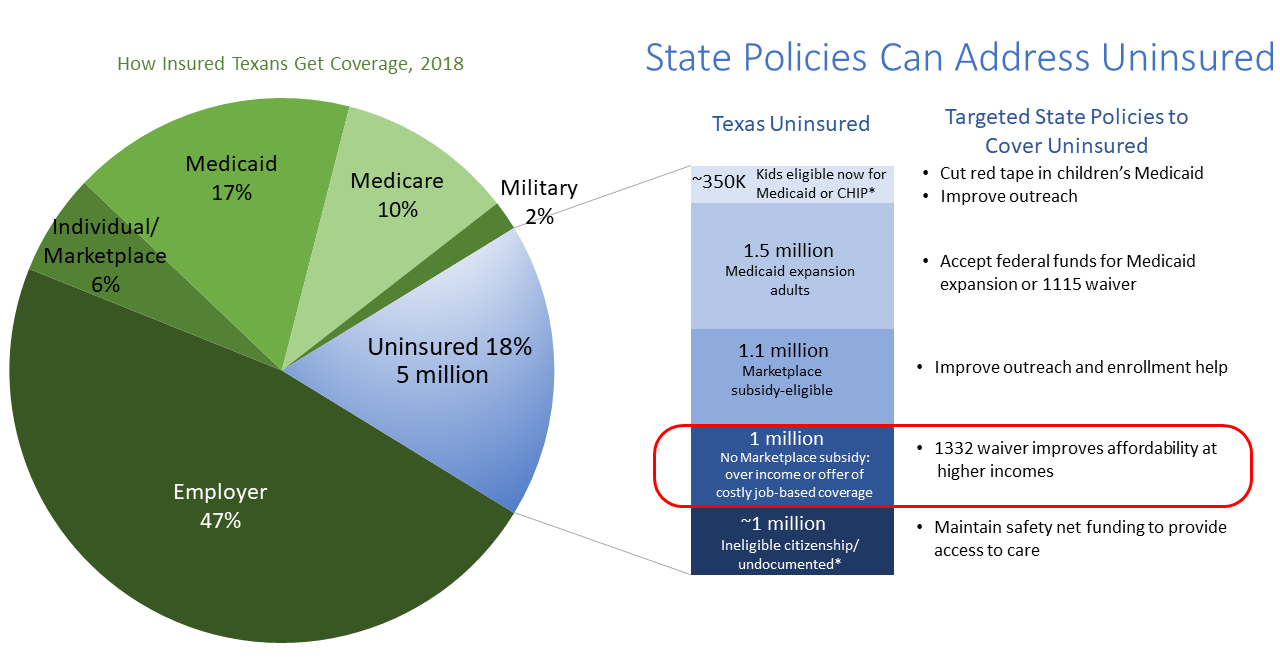 Data on Texas coverage sources from U.S. Census Bureau, 2018 American Community Survey.  Eligibility status among uninsured are estimates by Every Texan using the following data sources: Urban Instituted, Improvements in Uninsurance and Medicaid/CHIP Participation among Children and Parents Stalled in 2017, May 2019; Kaiser Family Foundation (KFF), The Coverage Gap: Uninsured Poor Adults in States that Do Not Expand Medicaid, January 2020; KFF, Distribution of Eligibility for ACA Health Coverage Among those Remaining Uninsured as of 2018; KFF, Distribution of Nonelderly Uninsured Individuals who are Ineligible for Financial Assistance due to Income, Offer of Employer Coverage, or Citizenship Status; US Census Bureau, 2018 American Community Survey; and Migration Policy Institute, Profile of the Unauthorized Population: Texas. *Categories subject to additional uncertainty related to undocumented population. Uninsured population excluded from all programs due to citizenship status could be larger. 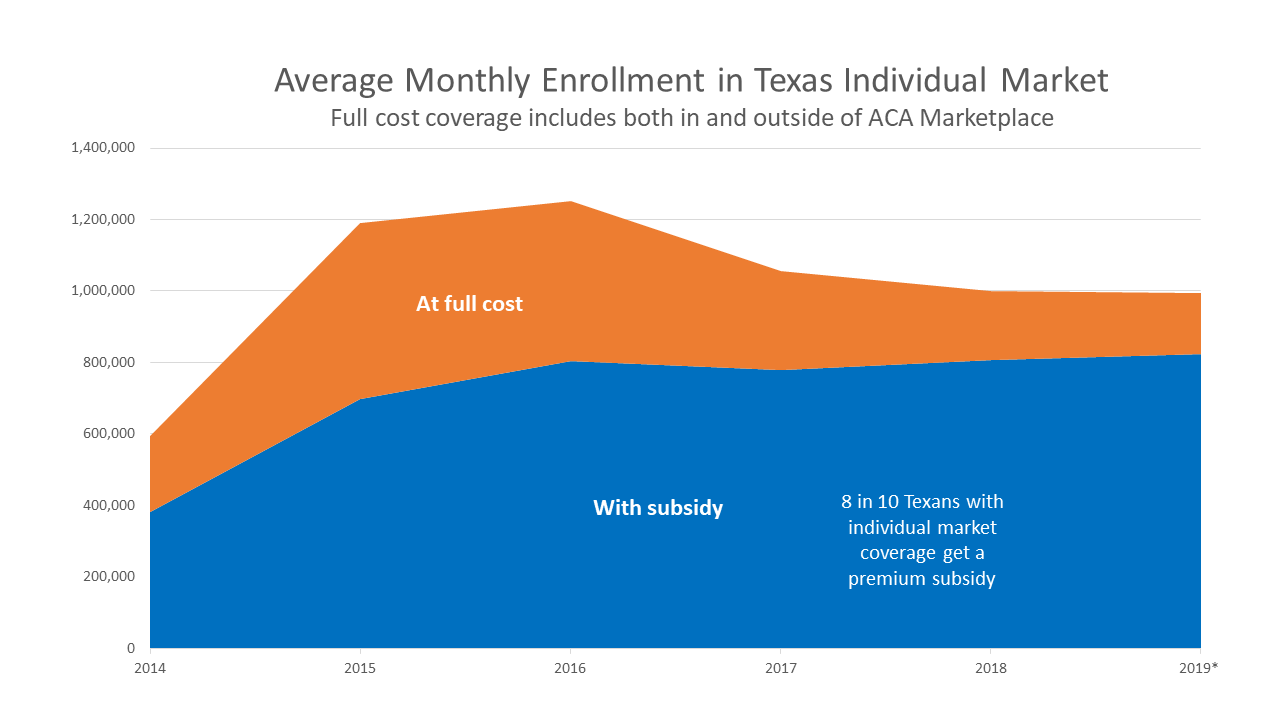 [iii] The Urban Institute, “How the COVID-19 Recession Could Affect Health Insurance Coverage,” May 2020, https://www.urban.org/sites/default/files/publication/102157/how-the-covid-19-recession-could-affect-health-insurance-coverage_0.pdf

[vii] States with approved 1332 reinsurance waivers include: Alaska, Colorado, Delaware, Maine, Maryland, Minnesota, Montana, New Hampshire, New Jersey, North Dakota, Oregon, Pennsylvania, Rhode Island, and Wisconsin. All of these, except for Wisconsin, have expanded Medicaid. Wisconsin provides Medicaid eligibility up to the poverty level under a Medicaid waiver, so it has no coverage gap that would leave adults in poverty with no affordable options.

[ix] Individuals with incomes from 100% – 400% of the federal poverty level can qualify for federally funded Marketplace subsidies (tax credits) which cap the cost of a benchmark Silver plan in the Marketplace at a share of the enrollee’s income. 9-in-10 Texas Marketplace enrollees receive tax credits to lower their premiums. The average full-price premiums in the Texas Marketplace is $532/month in 2020, while the average premium for a Texan with tax credits is $69/month.