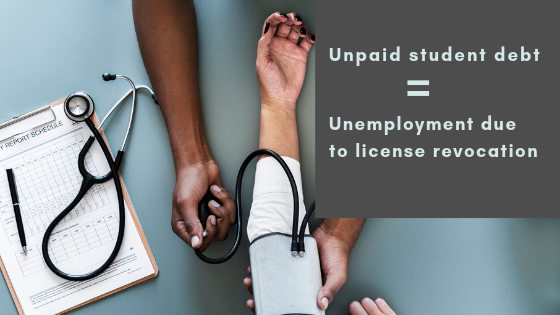 College students now regularly face choices between taking on greater amounts of debt, working hours in part-time jobs, or going without food, books or housing to cover their growing college costs and living expenses to complete their education.

These increasingly heavy burdens on Texas students and families is a result of soaring college costs and decreasing state investments into higher education. The price of admission to a public university in Texas has doubled over the past 15 years, and the price for attending a community college is on the rise as well.

Still, the cost of college doesn’t end at graduation. In fact, for many Texans, that’s where it begins. In 2017, 55 percent of four-year students graduated with debt, and the average amount of debt for these graduates was $26,824.

Worse still, students who default on their loans are at risk of having their professional licenses revoked, under current state statute.

Paying student loans upon graduation is a challenging reality for many Texans. One-fifth of Texans who graduated in 2016 were not working or enrolled in further education one year after they graduated.

And even for those who are employed, making ends meet while paying student debt isn’t easy. Half of the students who graduated from public institutions in 2015 had student loan debt at or above 60 percent of their first year wages.

Teachers, counselors, nurses, and social workers are among many other groups of Texans that require professional licenses to work. Under current Texas law, some of these workers may find themselves without the very credential they need to earn money to repay their student loans. The misguided Texas law allows the revocation or denial of renewal of professional licenses for those who fall behind on student loans.

Since the law was enacted in 1990, professional licensing organizations annually provide a list of licensees to Trellis, the organization that handles Texas student loans. Trellis then returns a list of licensees in default. Licensees must then enter a repayment agreement with Trellis, or they cannot have their licenses renewed. Prior to denying renewal, state law requires that the licensing agency have a hearing with the licensee. Still, reports indicate that 530 nurses and 250 teachers had their renewals denied for student debt default over a five year period.

Considering that a Brookings Institution report found that almost 40 percent of students who entered college in the fall of 2003 may default on their student loans by 2023, it is clear that this law will negatively impact a significant number of Texans.

Currently, 17 other states have similarly harmful statutes, but there is national momentum to change them. In June 2018, Washington State eliminated a similar practice. In the same month, U.S. Senators Elizabeth Warren and Marco Rubio introduced a federal bill that would prevent states from suspending licenses over federal student loan debt.

Here in Texas, there is bipartisan support to repeal the law that allows for licensure revocation, including HB 218 by Rep. Matt Krause, HB 258 by Rep. César Blanco, HB 466 by Rep. Ana Hernández, and SB 37 by Sen. Judith Zaffarini.

The Texas Higher Education Coordinating Board’s 60x30TX strategic plan aims for 60 percent of adults between the ages of 25-34 to earn a postsecondary credential by 2030. The 60x30TX plan centers manageable student debt as one of its four goals to achieve by 2030. In order to meet that goal, legislators must repeal laws that hinder those struggling with student debt from earning a living.