Medicaid Expansion: Not just for “able-bodied” or “childless” adults

Medicaid expansion is not just for single or “childless” adults.

Texas Medicaid has the most restrictive coverage of parents in the U.S..  In June 2020, 3.2 million Texas children were enrolled in Medicaid, but only 151,000 of their parents were covered—that’s less than one in 20 of the kids enrolled have parents who qualify.  Beyond that, many uninsured Texas adults near or below the poverty line are older adults who have grown children. Medicaid expansion would include parents, adults without kids, and adults with grown children. Click here to see the graphics and the full story. 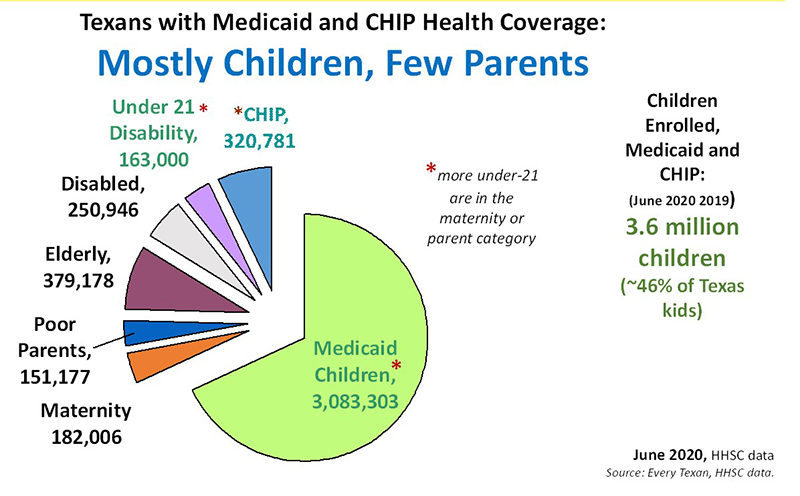 Many Texas adults with serious illnesses and complex chronic conditions (e.g., cancer, MS) do not qualify for Medicaid.  Texas Medicaid rules strictly limit which adults can get health coverage, and most adults who can still work are ineligible, including many Texas adults with serious illnesses and even disabilities.  Even life-threatening illnesses do not qualify an adult for Medicaid, unless the individual is expected to die within 12 months.  Too many low-wage adults lose out on treatment of their illnesses until their condition has deteriorated and their capacity to work and to parent is diminished. These Texans could be covered by Medicaid expansion. Click here to see why so many uninsured adults with serious medical conditions do NOT qualify for Medicaid in Texas today.

No matter whether Texas expands coverage through “traditional” Medicaid, or uses an 1115 waiver, low-earner adults in Texas—who today are excluded from the Affordable Care Act insurance subsidies—will have access to an affordable medical home with essential health benefits.

Want more?  Here are fact sheets from Cover Texas Now and the Kaiser Family Foundation on the impact Medicaid Expansion would have in Texas.