The Comptroller Shows Us the Money 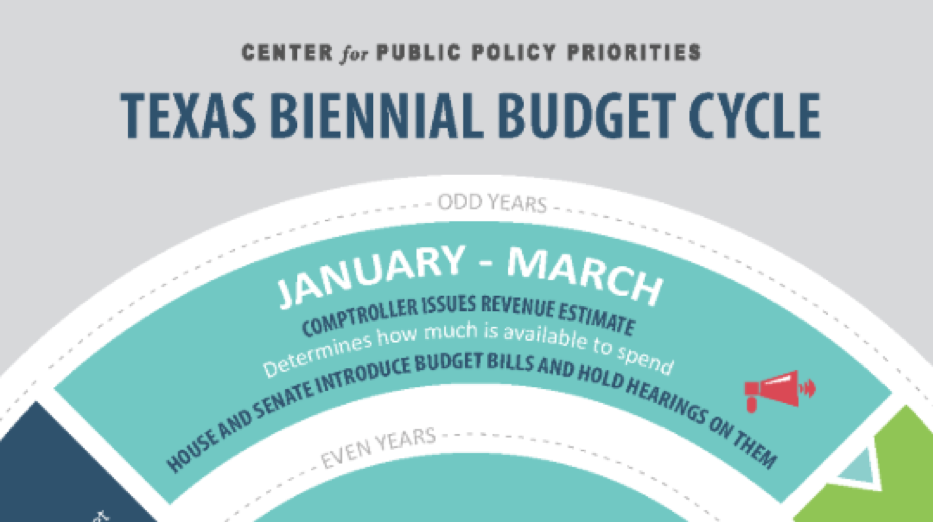 On January 7 at 10 A.M., State Comptroller Glenn Hegar is scheduled to issue the state revenue estimate for 2020-2021. The Biennial Revenue Estimate (BRE) details how much money lawmakers can invest in state services as they convene and write the 2020-2021 budget.
The Comptroller will also update legislators on the 2018-2019 state revenue situation and the projected balance of the Economic Stabilization Fund (or “Rainy Day Fund”) through 2021. The combination of these forecasts gives state officials an upper limit of what they can invest in public preK-12 and higher education, health care, public safety, and other services through August 2021. Legislators could spend more than this limit by approving increases to state revenue, but would still have to comply with other constitutional and statutory spending caps.
What to Look For
A key item to watch for in the estimate is a potential revision, up or down, in the amount of revenue that the state expects to collect through August 2019, which is the end of the current budget cycle. This is important because additional General Revenue or Economic Stabilization Fund dollars are needed in fiscal year 2019 to cover a potential $2.7 billion shortfall for health and human services and at least $740 million for Hurricane Harvey costs.
Hurricane Harvey hit after lawmakers had already passed a two-year budget, and the expenses associated with Harvey were not in the budget (other than a $110 million disaster grant program). The health and human services budget shortfall is almost entirely due to the 2017 legislature’s underfunding of the Medicaid program, plus $563 million in “borrowing” from Medicaid for transfers to public education.
These are frequent budget gimmicks that mask how underfunded health care and education are in Texas. In July 2018, the Comptroller’s revised 2018-2019 forecast gave legislators the welcome news that almost $2.7 billion of the supplemental funding needed for health care and Hurricane Harvey should be covered by an improved revenue outlook (particularly higher sales tax collections).

Factors that Influence Revenue Projections
The 2019 revenue projection depends on several state and national economic forecasts that may have changed since July 2018, such as oil and natural gas prices. Volatility in the energy sector affects not only state oil and gas severance taxes but also the much larger state sales tax, which generates more than 60 percent of General Revenue.
Comptroller revenue forecasts also usually mention “downside risks,” such as unfavorable developments in international trade, slowing national economic growth, or stock market volatility. Some of the key Texas indicators are shown below; Monday’s estimate may revise the 2018 and 2019 figures, and will also include forecasts for 2020 and 2021.

What’s Needed for “Current Services?”
One major piece of the puzzle that is traditionally not part of the Biennial Revenue Estimate: how much General Revenue is needed in 2020-2021 merely to continue funding existing state services? The 1991 session is the last time legislators received an official “current services” estimate from the Legislative Budget Board (LBB). “Current services” estimates fully take into account inflation – especially medical cost increases – and growth in school and college enrollment, publicly funded health care and pension beneficiaries, prison inmates, and other major Texas budget drivers.
With no official estimate available, CPPP looks to major state agencies’ budget requests for 2020-2021 and related documents (such as the Health and Human Services Consolidated Budget Request, or the Higher Education Coordinating Board formula funding recommendations) to come up with a bare-bones estimate. For 2020-2021, this “ballpark estimate” of the minimum needed to maintain services under current law comes to roughly $112 billion in General Revenue. This is only $2 billion (2 percent) more than the $110 billion in General Revenue that will cover 2018-2019 expenses, including supplemental costs not yet approved by legislators.

2019 session will see a much bigger supplemental: $2.7 billion for HHSC alone, plus Harvey. pic.twitter.com/C9kM8ODfpL

As was the case when the 2017 legislature wrote the 2018-19 budget, General Revenue support for state services would grow much more slowly than population and inflation if the next budget is crafted according to current law. For 2020-2021, the $112 billion estimate is the net result of reducing state General Revenue aid to schools by $3.8 billion while adding about $6 billion to higher education, health care, public safety, and other parts of the General Revenue budget.
Why, you might wonder, would current law require the state to put less General Revenue into preK-12 schools even as statewide enrollment grows by more than 82,000 students a year? The reasons are:

In other words, the state budget would barely grow, because current school finance laws would require the lion’s share of new spending to be funded at the local level, while providing no real (inflation-adjusted) increase in resources to school districts or charter schools.
What’s Needed to Improve Services for Texans
Instead of the status quo, state lawmakers could change current law to invest significantly more state aid into public schools. In addition to what education advocates have long recommended, such as raising the Basic Allotment or funding full-day prekindergarten, the 2019 Legislature has a wide-ranging set of recommendations from the School Finance Commission that could be implemented, some of which would actually increase resources available to schools.
Instead of cutting state General Revenue funding for public schools by almost $4 billion, as current law would allow, the 2019 Legislature should approve $5 billion more in state aid – about where state support would be if the Basic Allotment had kept up with inflation since 2016.
What we’ll find out from the Comptroller is whether this restoration will be possible with existing state revenue sources, which would require a General Revenue forecast of at least $117 billion, after addressing 2019’s supplemental needs. If the forecast is significantly higher than that: keep in mind that the budget written by the 2017 Legislature was “balanced” only because of $5.3 billion in unspent but legally earmarked revenue (known as General Revenue-Dedicated balances). These balances may not be as high in the next two years, if legislators choose to spend down the balances of the Texas Emissions Reduction Plan, Driver Responsibility Program, or other similar programs and their revenue sources.
CPPP will monitor the revenue estimate and continue analyzing the impact of the state budget on Texans. We will also raise awareness of the need for strong, stable sources of revenue to build a budget that meets Texans’ needs.

LET'S GET READY TO RUMBLE! Tune in for a play-by-play analysis of the @txcomptroller’s biennial revenue estimate from our CPPP budget & tax experts, Eva DeLuna Castro and Dick Lavine via Facebook Live. #txlege #txbudget #BRE2019